A Discussion of Disc Degeneration Types

If you’ve been to a doctor or done some Internet research, you have undoubtedly come across the terms “pinched nerve,” “bulging disc,” and “herniated disc” while looking for causes of spine pain. These terms are frequently used interchangeably in many articles and discussions, but what do they mean? What’s the difference? And how do you know which one is causing you pain?

All of these terms are ultimately used to describe spinal disc pathology and associated pain. Even healthcare professionals tend to not agree on a precise definition of these terms, which can be frustrating when hearing your diagnosis described differently (such as ruptured disc, torn disc, slipped disc, or disc protrusion) by various physicians.

Do I have a Slipped Disc or a Herniated Disc? 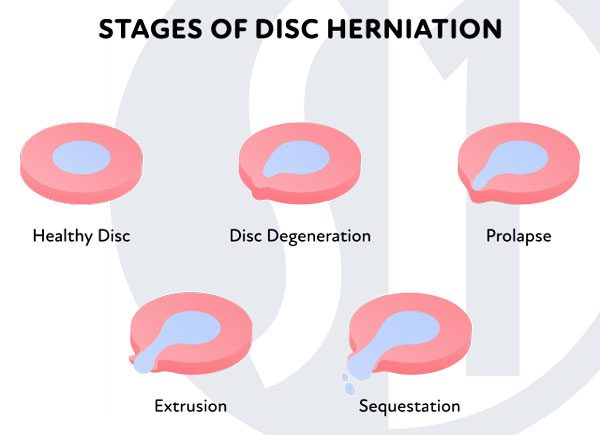 The difference between a herniated and bulging disc are simple. To use a common metaphor among physicians, think of a disc like a jelly donut. The donut has a liquid center surrounded by a thicker shell. If you press down on the donut, the sides bulge out as the jelly inside presses against them – this is a bulging disc or disc protrusion. If you press down on the donut hard enough that the jelly comes out, it becomes a herniated disc, ruptured disc, or torn disc.

The  term “slipped disc” is a kind of slang for accepted medical terms that relate to disc disorders that rarely include slipping. The term has become popular in non-medical articles and social media posts, but disc slippage is rarely, if ever, involved. More often than not this phrase actually refers to a herniated or bulging disc pushing into nerve endings nearby.

If you’re in pain, the nuances in the definitions are likely of little interest to you. The question you’re asking is why am I in pain and how do I get better? When a disc herniates, the material leaking out from the disc rather than the disc itself causes the pain. The material inside the disc can pinch or irritate a nearby nerve causing what is called radicular pain (or nerve root pain) that may radiate to other parts of the body. Leg pain from a pinched nerve is referred to as sciatica. A degenerated disc can cause pain within the disc space itself. This type of pain is referred to as axial pain, or degenerative disc disease.

Treating this kind of pain involves first understanding whether or not the disc is the cause of the pain or not (via a CT or MRI scan). The truth is just because a scan shows a herniated or ruptured disc doesn’t necessarily mean the disc is the cause of your back pain. The pain may be caused by a muscle strain or other soft tissue injury, in which case treating your bulging disc won’t provide any relief.

Your doctor will use the results of a CR or MRI scan combined with your medical history and symptoms to determine the cause of your pain and the best treatment course. Comprehensive treatment plans for disc pain are usually done in phases, such as:

Ready to Get Started?

If you’re struggling with disc pain you can’t always afford to wait through a process of exams referrals, imaging, and diagnosis before you can finally get some relief. SpineOne is a comprehensive spine care center, which means one location for exam, imaging, and treatment. Our specialist physicians and state-of-the-art imaging center work together to give you optimal care for your disc pain when you need it most: right now. Contact one of our team members to set up a same-day appointment and learn more.